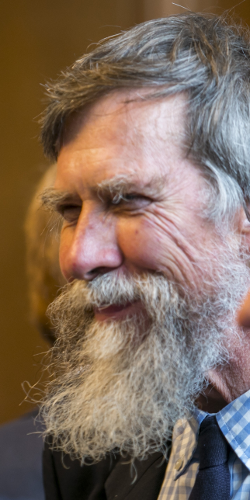 I have been engaged in soil mechanics research since 1970. My research has spanned the continuum from laboratory testing, through development of constitutive models for soils, to analysis of soil:structure interaction and response of geotechnical systems. My concern, through my research, my teaching, and my writing has been to develop a hierarchy of soil models which can be clearly linked with physical observations of modes of soil response and which can be accessible to practising engineers. The modelling is informed by experimental observation. I have extended the range of exploration of stress and strain space using devices which permit independent variation and control of all three principal stresses and which permit controlled rotation of principal axes.

Soil:structure interaction is controlled by stiffness properties. Constitutive modelling needs to describe, using plasticity models, regions of response that were classically regarded as elastic. This modelling has been assisted by developments in laboratory geophysics using piezoceramic bender elements. Collaboration with Yokohama National University has enabled progress on extending our models of soils to incorporate effects of changing grading - e.g., suffusion or particle breakage. Collaboration with the Polish Academy of Sciences (Gdansk) and with Chalmers Technical University, GoÌˆteborg is supporting studies of stress distributions and displacement patterns within granular materials using photoelastic and particle image ve-locimetry techniques. Experiments at Bristol on mixtures of flexible fibres and soils led to the developemnt of models which are now being used in a Dundee project 'rooting for sustainable peformance'. Modelling of weakly cemented mine waste backfill (with UWA, Perth) produces a dust-to- dust model. Real soils are variable and unpredictable. Observational techniques have been used for a long time to feed controlled response to geotechnical uncertainty. A recent Bristol project, with 10 industrial partners, developed process models for projects adopting an observational method. Uncertainty in human factors is as important as, if not more important than, geotechnical uncertainty. Next stages require sympathetic collaboration with behavioural and social scientists.

I was 'Editor in Chief' and Chairman of the editorial panel for GeÌotechnique for 3 years back in the 1980s. I was a member of the panel for a few years before that.. I have been an Associate Editor for Canadian Geotechnical Journal for many years. I was Editor for International Journal for Physical Modelling in Geomechanics for a critical 5 year period, getting enough papers to justify its existence, getting a very rapid turn-round from submission to publication (I did much of the reviewing myself - the nominal editorial panel did not appreciate the necessity of doing something to support their journal), and having a successful bid for inclusion in the various citation indices - which is of course crucial for persuading up and coming researchers to submit their papers. And of course I seem to receive a regular flow of papers from a large number of journals, of which I have or have not heard, with requests for reviews. New journals tend to be created when someone feels themselves slighted by an existing journal that has had the audacity to reject a paper. My experience as Associate Editor for Canadian Geotechnical Journal is that it becomes increasingly difficult to persuade colleagues (known or unknown) to agree to review manuscripts and to produce useful comments within a reasonable time. I often find myself inviting perhaps six reviewers and in the end having to make a decision based on just one (though evidently I prefer to have two, especially if there is something controversial or the subject matter is not one with which I am particularly familiar). Will that be any easier for this new journal? As an 'online only' journal do you need reviews? Could it be self-policing? Could papers be published immediately subject only to basic review for plausibility by a panel member and some basic standardisation of format (LATEX style helpful)? Such a paper would then become a focus for on-line discussion which would become real-time open review as a substitute for actual pre-publication review. Authors would be expected to withdraw a paper that was demonstrably flawed - panel members could intervene for recalcitrant authors. What is the attraction for 'young' researchers vying for promotion? With no initial citation index presence there will at best be a delay in producing statistically useful papers. Speed of publication seems to be the most tempting factor but timely reviewing will be a constant challenge.